How To Get your Music Onto Streaming Platforms 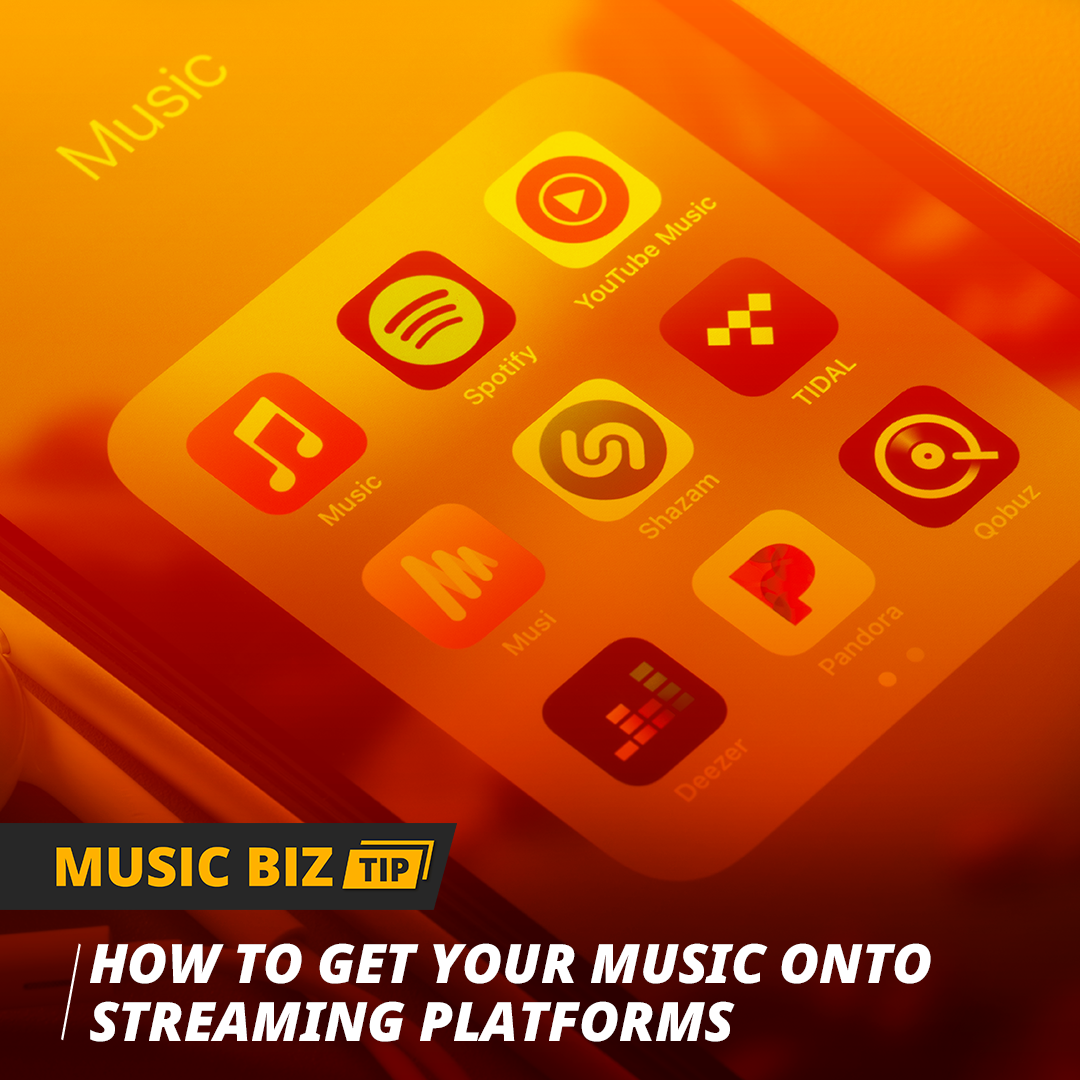 At some point in your music career, uploading songs to YouTube just isn’t as fulfilling. You want more.

You want to play with the big kids now, quite literally. Meaning you want your music to be played on some of the most significant streaming services around like Spotify, Apple Music, and Tidal, just like your favourite artists.

Not just that, you also think it’s time to cash in on streaming royalties.

Since you can’t upload to those platforms directly, the big question for most upcoming and independent artists is, “How do I get my music onto Spotify, Amazon, Tidal, etc.?”

What Is a Digital Distributor and What Do They Do?

The answer to the question in the previous paragraph above is simple: by using a digital distributor.

But now, you’re probably still clueless about what that is.

As we said before, there’s currently no way for artists to upload their music straight to these streaming platforms. Digital distributors act as sort of an intermediary or middleman that connects you to the streaming platforms. For a price, of course, these companies will put you on Apple Music, Deezer, Tidal, Amazon Music, and some even open the opportunity for you to be found on Instagram stories and TikTok.

We want to be clear that digital distributors are NOT record labels. While some may take a percentage of royalties as a commission, that does not mean they own your song in any way.

Quick Advice: You should choose only one distributor for each release. Choosing multiple distributors for one release would mean that your song will appear everywhere more than once. That’s unnecessary. But! You can use various distributors for numerous releases. Let’s say you just want to do a trial run with a few distributors. You could release your first single using one and your second single using a different one.

Essentially, all digital distributors do the same thing - get you on streaming platforms and pay you the royalties. Yet, they can be very different in how they do it, how much commission they take, their customer service, and their pricing strategy.

There are a few digital distributors to choose from. Right now, we can think of 18, but we won’t talk about all of them. What we are going to do for you is to highlight the significant pros and cons of Distro Kid, Ditto, Tunecore, and CDBaby, paying particular attention to their reputations, cost, features, and customer support.

DistroKid is pretty new to digital distribution starting in 2013, but that does not hinder them in any way. Many artists and producers rave about how easy and straightforward their interface is. They have many guides and videos to help you get started.

DistroKid is not bad with pricing. With just $20 a year, an artist can upload unlimited music. That means you could release a song every day or an album every month and pay $20 for all of it. WOAH!

Another neat thing about them is that they pay you 100% of your royalties. No commission is ever taken. All that your music earns is yours to keep.

Distorkid was one of the first services to offer payment splitting. For example, if you’re a part of a group or maybe the plan was to share profits with your producer, DistroKid allows each member to receive revenue with the payment splitting feature.

That probably sounds too good to be true, huh?

Everyone has their little nuances.

For DistroKid, one such nuance is that they only act as distributors and only collect money earned from streaming. But let’s say someone uses your music in a vlog on YouTube or maybe in an ad. By right, you’re due cash, but that’s not a part of the agreement with DistroKid. They’re only concerned with Spotify plays, iTunes plays, and the like.

DistroKid’s support can sometimes be a pain if you make a mistake and want to correct it. A few things that other distributors allow they may not. Like re-distributing a song if you uploaded incorrectly or titled it a certain way. Artists have found other platforms that were able to fix these issues, so it’s just DistroKid.

With the basic version, DistroKid uploads your music whenever they want. That’s not so good if you told your fans your music would be released on January 30, but DistroKid uploads it weeks later. However, they have the option of setting a launch date as an add-on service that would take your year’s cost to $36 up from $20.

CD Baby, established in 1998, was the first of its kind to help artists get their music onto iTunes and in retail stores. Now, it has more than 150 digital distribution partners for artists to take advantage of.

Not sure if you’d consider this a pro, but unlike DistroKid and Ditto (we’ll talk about them later), which charge yearly fees similar to subscriptions, CD Baby offers a one-time fee of $30 per single and $69 per album. So you kind of don’t have to worry about recurring or missed payments and your songs being removed.

CD Baby also offers wide physical distribution. Yep, so if you’re one who doesn’t just want to be on an online platform, CD Baby’s partnerships with companies like Super D, Alliance Entertainment and Amazon can get your CDs in music retail storefronts.

They’re also really great at licensing so wherever your music is played, they’ll track it down and get you your money. There’s a 40% commission, but I mean, it’s better than nothing.

Distributes to China and TikTok

CD Baby’s biggest disadvantage is its customer service. Everyone knows someone who’s had a terrible experience with them. Whether it’s music getting uploaded to the wrong artist account or trying to get the correct Spotify rate paid out, it can take a while before anyone addresses your grievances, and even then, it might not even be discussed appropriately.

Another downside to CD Baby that might turn you off is that they take a commission. Yea, so after paying them to distribute your music, they still want to take 15% of everything you earn from royalties. That sucks.

It is very similar to DistroKid in that the fee is only $20 a year and is a distributor only, meaning no collection is done outside of streaming providers. However, the difference is that what you’d get with DistroKid as an add-on (extra fee), you’d get with Ditto at no additional charge.

The digital space is constantly changing, and we never know what new platform will come along. A remarkable feature with Ditto is that they’ll automatically place your music on a new streaming service with no problem, no extra charge.

So far, it seems like an “everything and more” DistroKid, but every page has two sides.

Ditto is notoriously known for bad customer service. True, every digital distributor is not perfect, and a few people might have a bad experience here and there, but with Ditto, their users have complaints more times than not. Complaints with the most frequently missed payment or none at all and errors with song misordering will take forever to be addressed. Some persons will say however, that they’ve never had an issue so who knows?

TuneCore has been in the game for almost as long as CD Baby. Their biggest competitive advantage is that artists kept 100% of their streaming royalties.

TuneCore is often praised for the interest it takes in its artists. They even toot their own horn by saying they have a  “best-in-class customer care team”, and they’re probably right.

Similar to CD Baby, Tunecore prices per single or per album. There’s a but! At $10 for a single, $30 for an album’s first year of release and $50 for the album every year after that, Tunecore is the most expensive digital distributor to date.

The fees don’t stop there. There is the publishing administration fee, used to collect payment wherever your song is played, like on TV or in a YouTube video, you pay $75, and they take a 10% commission. WHEW! That all adds up for an upcoming artist.

The truth is, there is no “correct” answer. Each digital distributor is great for certain things and not great for others. It boils down to your personal preference and what your goals are. For example, if you just want to upload music for fun and aren’t necessarily concerned if others use your music outside of just for streaming, DistroKid and Ditto are for you. If you value business-customer relationships and appreciate customer support, maybe staying away from Ditto and CD Baby would be wise.

At the end of the day, all the platforms do their job of getting your music heard and paying you royalties where it’s due. It’s just for you to make your own comparison based on these for things, reputations, cost (fees), features, and customer support.